My review of Peepli Live with spoilers 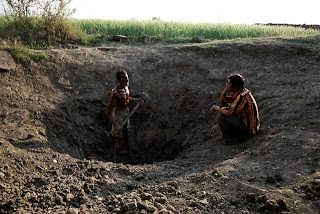 I heard a story. It took me to a cliff in the thick of the night - nearly pushed me off but didn't. I abandoned her before it slit my throat with its mocking laugh. I could see the turn straight back to my routine which knew something was wrong and was waiting for me in its cocoon with the engine on. A meek part of me wished to run back but I looked away. Burdened with an empty soul I jumped off. I kept pulling the ropes of the ocean towards me till I met a rock. Blood spilled off it. I let loose the ropes and the ocean breathed. My body which had now turned a pale yellow white dawned on that red sun. I carried that cold body through the water. I saw a door, pushed it - thinking it will lead me to a land beyond agony but it was ajar. I pushed, it didn't open. It didn't open. I did not relent. But it didn't open. Now my body was tired of the red flowing gown. So I laid there naked, waiting for that door to open. But it didn't. It was too late, I realised that meek part of me crossed me. I did run away, I didn't look away, I didn't jump off.

I can't reason why I was avoiding Peepli Live. And even when I watched it after some months, couldn't do so beyond the scene where the stringer dies, the story was constantly filling me with shame and when the old farmer died, I flinched. I have never seen that film again. It haunts me. I closed my eyes and hoped my murder was un-witnessed and deafened by the crowd that was with me - busy enjoying the film for nth time.

From that part of me who reached out for that door.
Email Post

Namrata Kilpady said…
It really hit some of us and left us cold. 2 of most poignant moments of the film. those who were still laughing at the hindi news channel journos exploring the alien abduction theory missed it.
Dec 14, 2010, 11:32:00 AM